Get fresh music recommendations delivered to your inbox every Friday.

by Blurry the Explorer 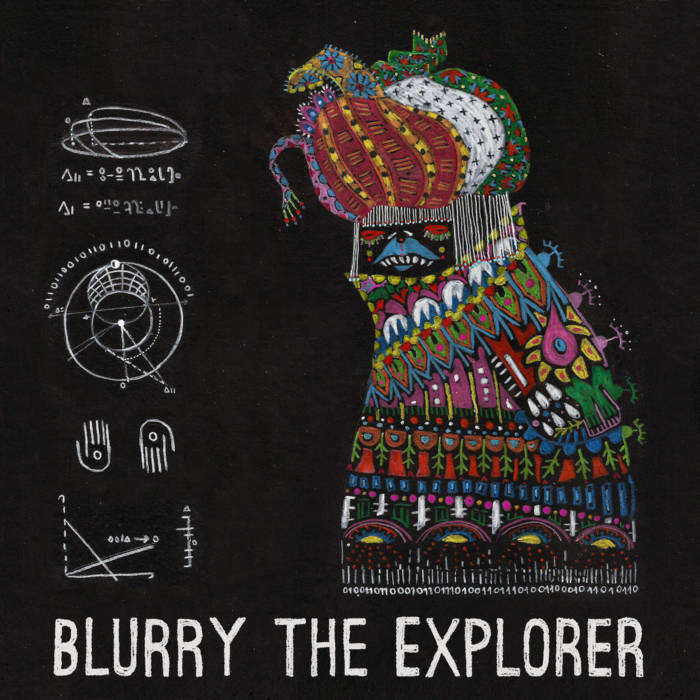 Jeremy Gustin -- the experimental composer, drummer, photographer, and world-traveler -- was elated when he booked a gig that would fly him back to Lisbon. He’d spent a lot of time in Alfama (Lisbon’s oldest neighborhood) over the years, and he felt a strong connection to the area after making two records there. As he booked his trip, he felt inspired to make another album, but this time, unlike with previous visits, Gustin would arrive with no band, no songs, and no concept for a record at all. So he put out some feelers.

The musicians sent around a few sketches, but most of the recording process was based on repetitive, minimalist improvisations, and Gustin, Gomes, and Dugre only had two rehearsals together. Once Abrahams arrived from London, the group only had two days to record. “I didn’t really realize I was producing the record yet, and with no one steering the ship I remember feeling bewildered and excited.”

Once everything was recorded, Abrahams returned to London, and Gustin played a few shows with Gomes and Dugre before returning to NYC on March 1st, just as the country was going into lockdown. “There was nothing else to do, so I could fully immerse myself in the album and start to think about who else could be involved. The pieces started coming to life and the record started to make sense, and it was incredibly exciting! That’s when we decided we needed to name our band.”

Gustin had recently moved into a friends apartment/recording studio in Tribeca  -- “A crazy time to live in Manhattan for the first time… A completely desolate and quiet Manhattan” -- and he noticed the complete and original (unedited) Diary of Anne Frank on his friends bookshelf. “I picked it up and was immediately swept away by how incredible she was. It gave me a profound perspective in lockdown.” Somewhere in the middle of the book, Frank mentions that she wrote an amusing story for a friend, called Blurry the Explorer; “It was one of those moments. I read those words and it hit me like lightning. The connection between the band being not only an exploration, but a creature exploring, and being “blurry,” as in, nothing was clear about this project at all. In fact, it’s very much still being revealed.”

The first song on the album to fully reveal itself was “Yoru Ni Yuku.” After completing the arrangement, Gustin sent the song to Tenniscoats in Tokyo, whom he had been hoping to collaborate with for years. “Their work is incredibly beautiful and absurd like children's songs from outer space. When Saya sent me the vocal stems and I put them on the track for the first time, I cried. There is something about it; it’s almost like a James Bond song that never was and never will be.”

Gustin likes to name his songs before he begins working on them in the studio, and the title “Limited By Jelly” stood out to vocalist Kalmia Traver (Rubblebucket, Kalbells). “This one takes an epic trip; there are unexpected turns right from the very beginning, which is one of the reasons I think it works so well as the album’s opening track.”

The next track, “Historia da sua Vida” (translated to “The History of Your Life,” in Portuguese), features a lead vocal from Gomes, and on brass instruments CJ Carminieri (Ymusic, Sufjan Stevens).

“Teşekkürler” (translated to “Thank you” in Turkish) features the percussionist and sound artist Berke Can Ozcan . Gustin learned the word “Tesekkurler” after spending 4 nights in Istanbul while on tour where Berke is based; “I loved so much how the word sounded, and now I was feeling thanks for him.” The two first collaborated on stage in Istanbul with Gustin’s duo project Star Rover.

“Orange Tree Fallen” is another song that Gustin titled as soon as he opened a new session on his computer. As the tune was coming together, the band agreed that the song could use a spoken word vocal, and as this idea came up, Gustin remembered a poem his friend Fiona Forte had sent him out of the blue the day before, from Recife in Brazil where she had been living. Gustin sent it to the band, and it resonated. That was when Abrahams reached out to his friend Brian Eno. “Something about Fiona being French but in Brazil, and Eno in the countryside in England where he’s working on a book, and myself in Manhattan… It was an amazing map of events.” Once the music was done, Gustin remembered the title he’d given the track (“Orange Tree Fallen”), and realized Forte was in Brazil surrounded by actual orange trees. “When I mentioned this to her, she told me she had taken a photo of an orange tree the very day she had sent me the poem! It was an unbelievable chain of events.”

“There's Still” and “Tulip Grazing,” both instrumental, have a darkness to them, and a wild ride element. The tones are beautiful and ugly, utilizing a sense of chaos. “Frequent and In Jest,” too, is wild and fun; harsh with a strange sense of space. “The way Ricardo and I play off of each other brings me a lot of joy. It really almost doesn’t work, but somehow it really does.”

“Bash Bish” was the last song recorded for the album. It features Sarah Pedinotti (LIP TALK) on lead vocal. Gustin named the track after a waterfall he often went to as a child, and he’d mentioned the track title to Sarah on the day she was going to record her vocal. “She had moved back upstate around Saratoga Springs and told me she was gonna take a long walk to think about the song.” On Pedinotti’s hike she kept running into the same person on the trail, but to be respectful of space during the pandemic, they kept trying to avoid each other only to randomly meet up again. “To both of their amazement, they turned out to be childhood friends who hadn’t seen each other in over 20 years! They exchanged info and soon thereafter, the friend texted Sarah saying they should meet at Bash Bish Falls. Sarah couldn’t believe what she was reading.”

The last track, “Fortitude Without Grace,” feels like an apocalyptic anthem of sorts -- “Full of despair, perhaps. There’s a haunting beauty and space. It’s a good way for Blurry The Explorer to leave the earth, for now.”

Blurry The Explorer’s debut, self-titled album is fearless. It was made with playful choices, based on gut feelings, miraculous experiences, and unbelievable coincidences. The soundscapes on the album bounce around the song-worlds with great ease, modestly showing off this group of diverse musicians' talents while giving modernized poetic nods to their influences. Blurry The Explorer have created a work that is absolutely unique.

Bandcamp Daily  your guide to the world of Bandcamp

Little Brother joins the show to discuss their beautiful journey, plus tunes from Fat Tony